The Alpha Male in Relationships 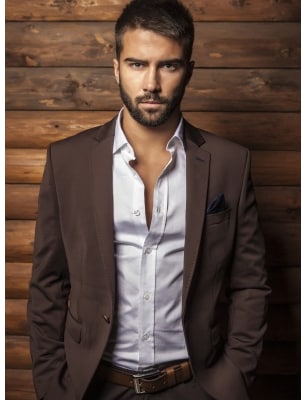 A man who never struggles with relationship issues or any insecurity issues for that matter, could be considered an alpha male. But sometimes it can be a bit hard to imagine him in a relationship. How does he behave in one? What kind of expectations does he have? What about his attitude?

To answer these questions, this article will provide you with a general overview and hopefully explain to you everything you need to know about alpha males in relationships.

Just one thing before we dive deeper into this topic: don't start to panic if you aren't doing everything in your relationship that is on the list below. If your relationship is going strong, you don't have to force these things. Just keep them in mind and consider them as a guide to helping you to improve yours.

But if your relationships always end in disasters and you have no idea why, then this list will be a useful asset to you.

And if you want to become an alpha in your relationship, then you should know that I recently launched my own course called Rules of the Alpha Male. Not only does it cover everything discussed in the article but it actually includes one book (Alpha Relationships) dedicated specifically to men wanting to improve their relationships!

Now, without further ado, here are five examples of how an alpha male behaves in relationships (and you should too):

The Alpha Male in a Relationship

The biggest difference between them: the first guy needs the girl; the second one wants the girl.

When an alpha man decides to become exclusive with a woman (yes, he is usually the one making the decision), he goes into this relationship with a distinct mindset – he knows that he has a lot to offer and isn't in it to get. This means that he isn't in the relationship because he needs something from his girlfriend. He is in it because he found someone he can share his life with.

And if it, for whatever reason, doesn't work out with one girl, he knows that there are other women around. He doesn't obsess about "the one that got away" and therefore won't be affected by the loss so much as other men would. Of course, this doesn't mean that he takes the relationship lightly. He cares as much as any other man would, it's just not in his nature to look at women as they were scarce.

2. Has his own life. Guys often make the mistake in relationships where they lose all interest in the things they used to do and dedicate all their time and attention to their woman. Before they had a girlfriend, they were busy with their own lives (friends and hobbies), but after she came into the picture, everything else had to be suddenly dropped and she became the center of the attention.

An alpha male is always busy, even when he is in a committed relationship. He has his own stuff to do and places to be. He won't suddenly drop everything just because he found a girlfriend. He will always find the time for his friends and doesn't dependent on her company alone to have a good time. In fact, he balances the time he has for his girlfriend and friends.

3. Isn't hoping for a girlfriend to define him. When a guy gets into a relationship, he usually changes for the better or worse (depending on what kind of girl he is dating). The problem here is that many men don't really have a firm sense of who they are. When they find a girlfriend, they hope that she will finally define it for them. They lack a direction in life and hope that their partner will provide them with the answer.

When a guy in a relationship relies on his girlfriend to define who he is as a person, he becomes dependent on her. Eventually, this will backfire when she decides that he isn't worth her time anymore and leaves. This will make him feel like he just lost his identity and purpose. It will make him desperate to win her back or replaces her with another girl to regain what he lost.

That's why many men could learn a lot from an alpha male. He already knows who he is and there is not much a woman can do to change that. Sure, when he thinks that she can guide him to a better path, he takes it, but initially, it's still his decision. When an alpha starts the relationship, it will never cross his mind that he needs someone else to define him as a person.

4. Is making the decisions. Women want a decisive man, period! If a guy can't make a simple decision by himself and always has to rely on his girlfriend to make the final call, eventually she will start to lose attraction for him. Even when he is just trying to be nice and considerate, women oftentimes see it as a weakness.

An alpha is always the "guy with the plan". His girlfriend knows that she can rely on him 100% to make the tough decisions. She will always turn to him when they need to make a decision and he will have the final say. This doesn't mean he discards her opinion completely. He always considers the opinion of a woman, but when it comes to making important calls, he won't hesitate to make them.

5. Isn't a pushover. Many men in relationships lack a backbone. The woman is the one who makes all the important decisions (sometimes even for them) and always has her way. These guys just don't know when to take a stand and use the word "NO" when it's needed. They do everything to avoid a confrontation with a woman in fear of angering her.

I have already written about how a woman always tests a man, and if he seems like a spineless wimp, she will just dump him. That's why guys need to learn how an alpha handles these situations.

The alpha male isn't afraid of speaking his mind and getting into a disagreement with his girlfriend. When it's obvious that his girlfriend is testing him, he has no problems responding accordingly and making it clear that he doesn't tolerate her behavior. She might not like it, but in the long run, she will respect him for it.

These five simple tips portray how an alpha male would behave in his relationship with a woman. Now, if you are looking for fulfilling and lasting relationships, then my course covers it all. Like already mentioned, it covers everything this article discussed and even goes very deep into the topic of becoming a fulfilled man. It applies to every guy, whether he is single or in a long-term relationship, but will be especially beneficial to someone looking for a girlfriend.

At the end of the day, stay true to yourself and don't change because of someone else. Don't sacrifice your identity for them. Because if they give up on you, you will lose everything. Change because you need to, because you want it, and not because she might expect it from you.

84 comments on “The Alpha Male in Relationships”